← more from
Pale Wizard Records
Get fresh music recommendations delivered to your inbox every Friday.
We've updated our Terms of Use. You can review the changes here. 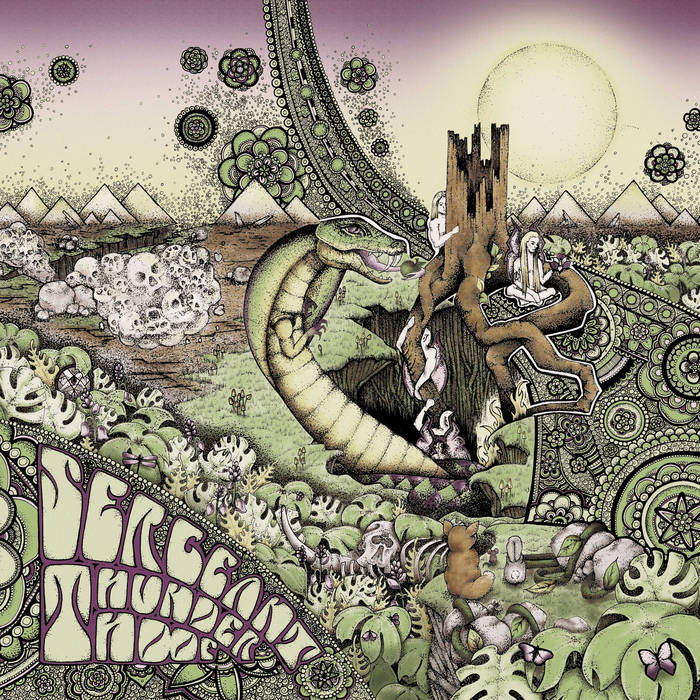 thunderbunny Retro rockin', toe tapper - makes me want to turn it up, every time I listen to it. Favorite track: The Tree And The Serpent.

Dave Aftandilian Mind-melting fantasy-themed psych-doom as only the Brits can do it! Takes me back to the 70s greats but also very much has its own solid-chugging, spirit-soaring, and sometimes haunting vibe. Close your eyes, lean back, and enjoy the ride.

brutalcow Allow these frequencies to vibrate your car and transport you to a realm of sonic harmony. Turn it up loud. Favorite track: Diesel Breath.
more...

Emperor of the Underground of Doom..

“Barely tamed, extremely hallucinogenic and beautifully overloaded all round, this lysergic rollercoaster shows that the underground cottage industry is alive and kicking. 8/10” Classic Rock Magazine

“Sergeant Thunderhoof have a sound all of their own, and it is the sound of musical genius. 10/10”. Powerplay Magazine

“What immediately grabs you is the way this band hold themselves, the whole album feels and sounds totally in control, this is a band that knows exactly where they are going, and it sounds accomplished and polished throughout.”. Dancing About Architecture

“Terra Solus is an absolute killer of an album from beginning to end.” Taste Nation

“if you are familiar with their past work you will know to expect plenty of addictive grooviness, raucous riffage and hazy psychedelics all executed with a breath-taking level of musicianship and outstanding display of vocal dynamics and Terra Solus does not disappoint in any of those departments.” Doom Charts

“Like Kyuss before them, they refuse to be pigeonholed into a single sound, delivering varied, impeccably composed songs that always come back to the riffs, but don't live or die by them.” Metal Bandcamp

"It didn’t take long for this one to make its way to one of my most played albums this year. An album I keep coming back to for their impressive sound which is taking the right bits and pieces from our fuzzy scene.” More Fuzz

“Sergeant Thunderhoof's unparalleled synthesis of Sabbathian grooves, transcendental psychedelia, and unpredictable hooky flair make them more than just a stoner rock band. Sergeant Thunderhoof is definitely one of the most original sounding entities out there right now and I hope that they will continue to impress us with their mercurial brand of heavy rock for years to come.” Moanineggnog

“Sergeant Thunderhoof just keep getting better with each release. Enter Terra Solus, the band's third studio album... and it looks like we've got another slab of Iommic riffs, soaring vocals and ripping solos to look forward to. Honing their craft with each new album seems to be second nature for vocalist Dan Flitcroft and company. Terra Solus is no different in this regard and would fit nicely in any record collection right next to any Dio-era Sabbath records (as a fan of Dio, I mean this in a good way!).” Doom Wizard Dungeon

“Eight killer tracks of heavy psyched out stoner perfection with sprinkles of metal, doom, and space rock throughout. This is the Bath, UK bands third studio album and it is delivered stunningly. The execution and recording are flawless and the songs are some of the strongest I have heard in a while.” Outlaws of the Sun

Psychedelic tinged heavy grooves from the mystical realms of Somerset in England.

Bandcamp Daily  your guide to the world of Bandcamp